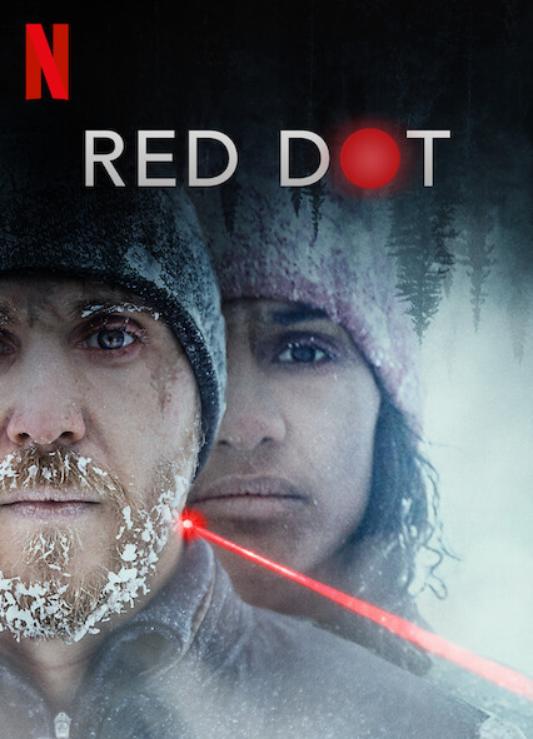 David (Anastasios Soulis) and his pregnant wife Nadja (Nanna Blondell) travel to the north of Sweden for a hiking trip, hoping to revive their relationship. Once they’re camping beneath the northern lights they see a red dot on their tent and soon realise that that is the laser sight of a rifle.

Just like many other thriller movies set in the wilderness Red Dot involves people running away from someone who wants to kill them. The reason the killer wants them dead is unknown. The couple assume it’s some villagers who really didn’t like seeing strangers in their land, especially an interracial couple. Since they arrived in the hotel everyone seemed weirded out by their presence and a some locals also make jokes about the fact that she’s black. This is all made to make the viewer empathise with the two main characters but, in the end, everything changes when the reason why they are being followed is explained.

Apparently, the day the couple got engaged, they ran over and killed a young boy by accident while they were driving back home. While Nadja really wanted to call the police David decided it was better for them to just leave and forget what happened. The man who is trying to kill them is Thomas (Thomas Hanzon), the father of the child, who has been planning his revenge for years.

Nadja is not only victim of racism throughout the movie, she is also hit with a rifle, tied up to a chair and, worst of all, almost tortured with a power drill by her husband. Thomas’s purpose was to make David kill both her and her child but he is forced to shoot David in the knee when he does not comply. Despite their attempts to stay alive Nadja is still murdered by Thomas’s wife in the end. David survives because they let him, he asks them to be killed but they want him to suffer.

Red Dot relies way too much on overused tropes of the genre without giving a new take on it. It’s a #StaunchTestFail.