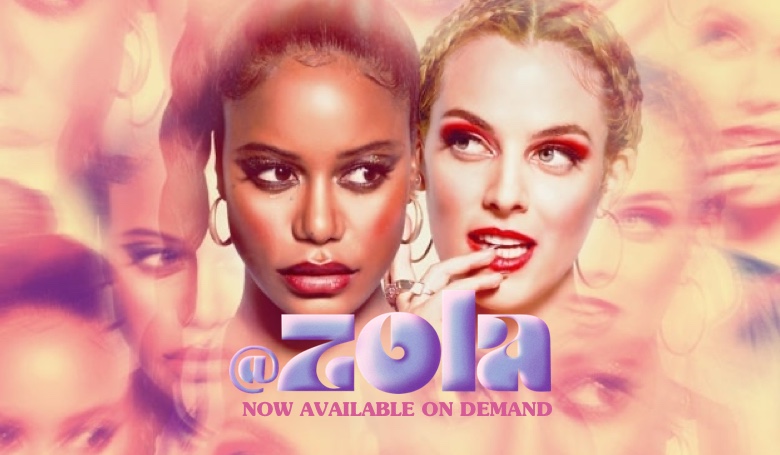 Zola is loosely based on true events that went viral via a 148-tweet thread written by Aizah “Zola” King that trended worldwide. It’s now infamous tagline read “The Greatest Stripper Saga Ever Tweeted”.

The film is based on exotic dancers and best friends, Zola (Taylour Paige) and Stefani (Riley Keough), who go to Florida for the weekend to earn some extra money at high end clubs, accompanied by Derrek (Nicholas Braun), Stefani’s boyfriend, and X (Colman Domingo), her “roommate”.

Zola begins to feel this quick money-making scheme is not quite as glittering as promised. The drive to Florida is long and arduous, resulting in a grotty motel room, only the one, which is by all accounts and purposes to save money, as the girls will be working, and therefore won’t be needing the room to sleep.

Initially they start out in a dingy club where Zola catches on that this is not a high-end club, the earnings are meagre and the clientele are sleazy. Stefani starts taking selfies of them both and advertising them on a sex website, without Zolas consent or knowledge.  X, soon to be identified as her pimp, abruptly changes from Mr Nice Guy chauffeur to violent enforcer, physically and verbally threatening Zola and Stefani. However, Stefani appears unfazed by this switch of character, and there seems to be an unconfirmed suggestion throughout the film that Stefani could in fact be part of the grooming process.

The trip quickly descends into a story of trafficking, violence, prostitution, a shooting, coercion and even abduction.

Stefani takes Zola to a hotel room where Zola point blank refuses to engage in sex work but agrees to help Stefani as her security and banker, and additionally helps her to take more professional pictures and increases her hourly rates.

X takes all of Stefani’s money after the first night but is impressed with Zola’s social media content skills and insists she continues the work with Stefani thereafter.

For the rest of the film, we see both girls being put in perilous situations with promises of security by X, with one scene involving multiple males and Stefani, telling her they arranged certain services with X, and Zola frantically trying to call him to confirm this arrangement. Stefani is abducted on another client visit and is beaten unconscious.

As well as the two girls being coerced, groomed, threatened and physically assaulted, Stefani’s doomed and dopey boyfriend Derrek is a despondent character who is learns of Stefani’s activities halfway through the film. He begs her to stop, and even jumps through an open window at one point to stop her, and generally is a painful individual to observe from the side-lines. Without spoiling too much of the plot, Derrek is directly involved in Stefani’s abduction, albeit from his own stupidity.

The film takes an interesting angle, uaing both girls’ perspectives, with them talking directly to the camera with their own voice overs. They have entirely different opinions on what has happened, each blaming the other for the situation they’ve found themselves in.

After watching the film and reading about how the original storyline came about, I was intrigued to read Zola’s true account and the various interviews she conducted after. She made it a point that some scenes were true events that did happen that weekend, and some were fictionalised for dramatic purposes, but more importantly she wanted to raise awareness that this does happen. Zola does not shy away in her interviews that she has been a sex worker, nor does she sugar coat that she has witnessed violence and robbery in this line of work.

But she declares she has never been in a situation with sex trafficking and certainly the manipulation and exploitation from another woman was a shocking and traumatic experience.

An interesting sidenote, the real-life X, Akporode Uwedjojevwe, was sentenced in 2017 to 16 years in prison after he pleaded guilty to one count of sex trafficking and one count of coercion. Maybe the entertainment industry in this instance, really did get justice for a criminal.

Of course from the outset this film is a #StaunchTestFail, with multiple scenes of violence, sexual violence, coercion, grooming and trafficking.