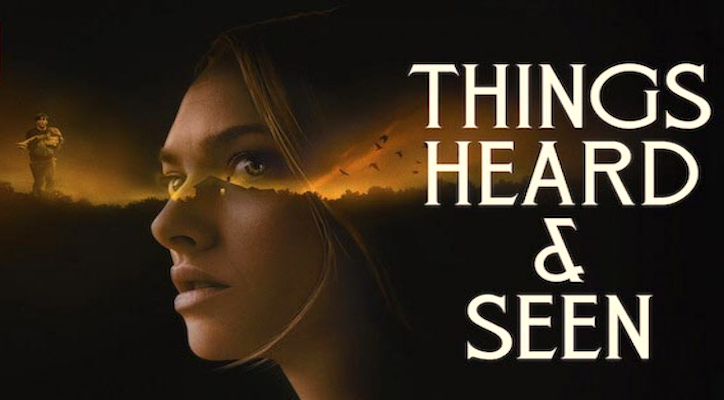 Artist Catherine Claire moves with her family from Manhattan to a remote farm house in the Hudson Valley. As she’s getting used to her new life strange paranormal activities start happening in the house.

Things Heard and Seen (Shari Springer Berman and Robert Pulcini) is a ghost story mixed up with an unhappy marriage drama. Catherine leaves Manhattan because her husband George got an important job as a University Professor. She tries really hard to make her marriage work out but George starts mistreating her after the move. He gaslights her, keeps her away from her new friends and has an affair with one of his students.

Apparently George has been possessed by the spirit of a man who killed his wife in the farm house. When Catherine finds out she tries to run away with their five-year-old daughter but George stops her, hits her, drugs her and then kills her violently with an axe. Catherine then turns into a good ghost and is seen together with the ghost of the woman who was previously killed in the house.

Catherine is a victim, and that’s all she is during the movie, she’s passive, and when she tries to confront her husband she’s brutally and quickly killed by him. Do we really need another representation of a woman like this?

At the end of the film it’s made clear that George has always been a liar and a violent, bad man, why blame an evil ghost for his behaviour?

Three women were killed by their husbands in the farm house including Catherine. George failed to kill Catherine’s best friend Justine but succeeded in killing his boss.