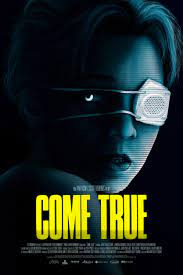 By adminDecember 1, 2021No Comments

Sarah Dunne (Julia Sarah Stone) is a high school student in need of money who agrees to be a test subject in a university sleep experiment, until the study starts having a negative impact on her life.

Come True is a slow burn psychological horror/thriller that exploits the familiar and recurring visuals experienced by those who suffer from sleep paralysis to create a movie that is both original and unpredictable.

Sarah realizes the study is affecting her life when she starts having seizures and panic attacks. When she is about to quit the experiment Jeremy (Landon Liboiron), one of the students involved in it, asks her to continue being a test subject – but he doesn’t force her to do that, no one hurts her nor tries to restrain her.

However, Jeremy’s behavior towards Sarah is a bit creepy. He stalks her, follows her and at some point they end up in bed together which is weird to watch because Sarah tells him that she’s 18, but she looks younger, and he is clearly older (even though his age is not known).

There is a very short scene in which Sarah and her friend Zoe are watching a horror film in which a woman is stabbed but that’s the only graphic scene involving violence towards a woman.

Sarah is sick and has seizure various times throughout the movie but no one really tries to hurt her, I would say this one is a #StaunchTestDebate, what do you think?