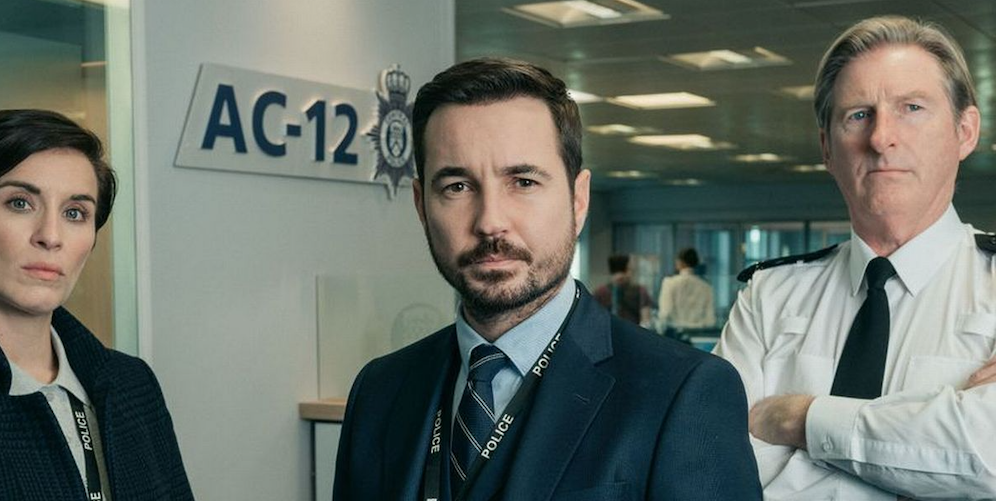 How an invisible mastermind justified all that violence

By Esther Huntington-Whiteley and the Staunch Test team

Since the sixth season has drawn to a close, let’s look back at the TV series Line of Duty and talk about its representations of violence, and in particular, its hallmark strain of violence against women.

In case you haven’t heard of it, Line of Duty is a British police procedural television series created by Jed Mercurio and produced by World Productions. It’s set within AC12, a fictional department investigating police corruption and its links to organised crime.

The show is undeniably popular; in 2012, when BBC Two began to broadcast the first series, it was the channel’s best-performing drama series in ten years. Its final episode closed season six with a record-breaking 12.5 million viewers. But part of its success rests on the supposed existence of an invisible leader – the elusive ‘H’, whose identity the show’s main police characters strive to reveal. The mystery figure is feared and revered, a dangerous insider, issuing terse, menacing orders that result in extreme violence carried out by those in his (or her) power.

Line of Duty certainly would not pass the Staunch Test, which rates whether a film or television show features a woman being beaten, stalked, sexually exploited, raped, murdered or otherwise abused, (more on that later). The series is full of clichéd plot tropes, including violent murders that often feel played for their shock value. The world of gangland mobsters and the idea that police officers might be corrupt are hardly original, but they allow an expectation of violence, which we’ve learnt to absorb as a natural element in the progression of plot or character development within such television drama.

A lot of violence in the show- especially that towards women – appears legitimate because it occurs suddenly and shockingly in a fast-moving story. The context is a world of desperate, ruthless men committing familiar heists, trafficking women, running guns or drugs, driven by fear, greed and money. Behind them is the manipulative, unseen puppet master issuing orders and threats that send the foot soldiers out to do his (or her) violent bidding. Whether this is with guns blazing in a robbery, or a swift execution, this type of violence is not only normalised, but celebrated and relished in one of the most popular shows on television.

Our ready acceptance of violence in Line of Duty is particularly pertinent when it comes to violence against women; especially female police officers who get in the way of the bad guys. The styles of execution here included a slit throat, a pointblank gunshot to the head, drowning and even that renaissance favourite, defenestration – though admittedly it is quite original in the 21st century to see an inconvenient WPC tossed out of a window. Violence is so embedded in the plots of Line of Duty that it becomes impossible to distinguish between that which makes sense in the story and that which is simply there as noisy punctuation, a row of exclamation marks added for dramatic effect. When meted out to women, particularly women supposedly in the role of society’s protectors, we are supposed to be even more shocked and horrified.

Line of Duty is a fictitious show which tries to be ultra-realistic – but is its brand of casual, brutish violence – justified by the greed or fear of its proponents – something we actually admire and want to witness or have we simply been conditioned into finding it entertaining? Would it not be possible to create a show that excels in plotting, delivers great twists and turns, with much better-developed characters, considerably better dialogue, high stakes and interesting motivations, without having to resort to this very macho and thuggish blood fest? When life is apparently so cheap, are we honestly supposed to buy that what really, really matters is that bent coppers are rooted out of a highly flawed organisation in which they clearly thrive? And when the unmasking of the villain at the climax of six series makes the focus of the whole series disappear in a puff of smoke, have we maybe just been told that, no, none of it really mattered at all.

The show’s status as a police procedural television series means that writers, directors, and producers give themselves license to include violence without being directly accountable for the consequences of its representation. Attributing it to an invisible Mr (or Mrs) Bad created an arch villain against whom the elite AC12 officers were pitted. We were led to believe that all that violence could ultimately be laid at this villain’s door, and the particularly vicious murders, especially of women, while regretted, could be easily explained away. But no. Like so many other female characters on screen, they were simply collateral.

When it transpires that there was no ‘H’, no one individual pulling the strings, it makes the elite squad look pretty silly. It also removes responsibility for this sanctioned violence to women not only from the characters who believed they had a leader with an overview and a grand plan, but from the writer and producers alike. The audience was lulled into believing that all that killing was necessary, when it turns out to be a joke. That makes it purely gratuitous, which is something to be a whole lot less proud of.