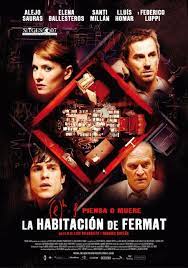 Four mathematicians receive an invitation to solve the world’s greatest enigma by a mysterious host who calls himself Fermat. They find themselves trapped in a room that is slowly shrinking as they try to figure out why they are there and who wants to kill them.

Olivia (Elena Ballesteros) is the only female character in the movie. She’s a mathematician just like the others and, even if she apparently had some sort of affairs with some of the men in the room, she is never insulted or treated differently just because she is a woman.

When they realize someone wants them dead they all panic but luckily for Olivia no one vents their anger on her.

Fermat’s Room is a good Spanish thriller movie and it is also a #StaunchTestPass.