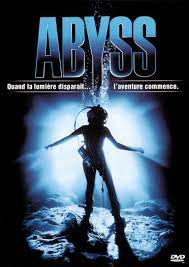 An oil platform crew, led by Bud Brigman (Ed Harris), go on a recovery mission after an American submarine sinks in the Caribbean seas. They find something unexpected and unbelievable hidden at the bottom of the ocean.

James Camerons’ The Abyss feels like an outer space adventure set in the depths of Earth’s ocean. It was inspired by a short story by H.G. Wells titled ‘In the Abyss’ that first introduced the notion of sea aliens.

There are only two female characters in this movie. One of them is the oil platform’s designer Lindsey Brigman (Mary Elizabeth Mastrantonio) who also happens to be Bud’s ex wife. The other one is Lisa Standing (Kimberly Scott) one of the platform’s crew members, she is teasingly nicknamed “One Night” by her colleagues.

Lindsay is the first to notice something non-human is living under the ocean, but no one in the ship believes her , especially her ex-husband, who keeps telling her to “Stop with the hysteria”. Lindsay is also grabbed and gagged by the Navy SEAL leader who was supposed to help the crew with their recovery mission but who instead becomes the villain of the story. Lindsay also drowns at some point but after numerous attempts at reviving her she finally comes back to life.

The Abyss is an original thriller adventure spoiled by its inherent misyogony and also a #StaunchTestFail.

The Abyss is an original thriller adventure spoiled by its inherent misyogony and also a #StaunchTestFail.