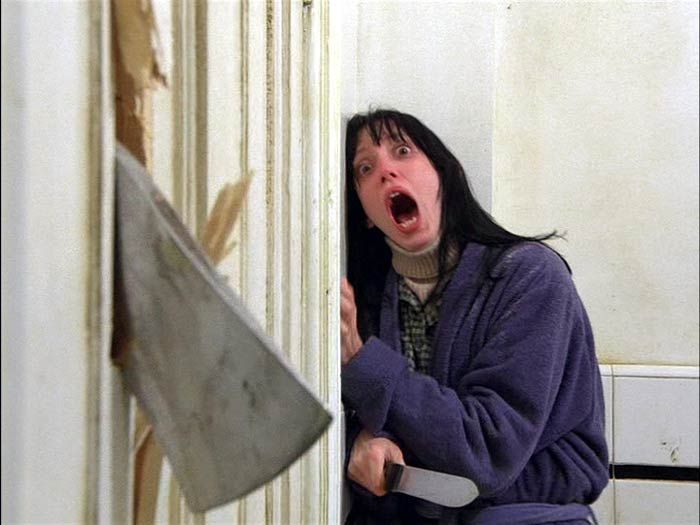 By adminOctober 5, 2021No Comments

Tammy Thornton revisits The Shining with a fresh pair of eyes.

I want to be clear from the start, I love a good horror film. Of all genres, psychological, blood and gore, paranormal, the whole shebang. And I watched quite a few horror films as a youngster, hid behind the cushion, and watching guiltily as I knew my mam would not allow me to watch films that were not “age appropriate.

So I decided to start rewatching what we now call the classics. And not just in horror genres, but all kinds of iconic movies that still to this day, were huge box office successes, and major talking points in the entertainment industry.

The Shining was a huge favourite of mine growing up. I loved the idea of an alcoholic writer going slightly mad in a crazy old hotel, holed up in a snowstorm and a child that was also slightly disturbed, either by his surroundings or his own childhood issues, and his wife running for her life.

What I didn’t realise until very recently were the issues surrounding the filming of this iconic horror movie, with particular reference to Shelley Duvall. After some research, I discovered director Stanley Kubrick was such a “perfectionist” (I’d use other choice words actually), in ensuring the character Wendy was believable in her fear of her husband, that she was subjected to intense emotional and psychological abuse during her time filming. Other tactics he used are well documented, but to name a few, isolating her from other crew members, insisting they ignore her completely, cutting her lines, changing the script and ridiculous long days of filming with little or no rest.

He was consistently and solely responsible for her being in a permanent state of anxiety and torment, just to get his money shot, the infamous swinging of the baseball bat, which took 127 takes. In fact, Shelley Duvall was treated so appallingly and cruelly during this film, clumps of her hair fell out. She was continually gaslighted by Kubrick, with him her and her ideas were worthless and that she was wasting everyone’s time on set.

Fast forward 40 years, and as I rewatch this film, I have an horrendously uncomfortable feeling that what I’m now watching is nothing more than a systematic abuse. Shelley isn’t acting in the famous baseball scene, she is in genuine distress, her tears are real, her fear is palpable. But it’s not acting. This is watching a gruesome act of the cruellest form of abuse  (while under contract) and we’re calling it entertainment.

Let’s be clear. This is not entertainment, this is us as an audience accepting, and even revelling in a woman in the deep depths of trauma, exhaustion and terror, and justifying it in our own minds that she’s an actress and it’s okay. That’s her job, and what a great actress she was.

There are quotes all over the internet of Kubrick telling the crew not to give Duvall any sympathy. Let’s also remind ourselves it is no coincidence that since that film, Duvall has lived a life as a recluse and suffered mental health issues. However, she is still forgiving and accepting when she talks of Kubrick, which would suggest she is still traumatised by her treatment.

Stephen King, on the other hand, maintains his disgust at what Kubrick did to the character of Wendy Torrance:

One of the most misogynistic characters ever put on film. She’s basically just there to scream and be stupid and that’s not the woman that I wrote about. [Stephen King]

So, the question remains. How far are we willing to go to be entertained, what are our limits, even when we know the back story of such an abusive tale? What will we accept as a general audience, and as individuals, or dismiss, just because we don’t want to question it? Are we blissfully unaware or acting deliberately ignorant, because it doesn’t actually directly affect us, it happened years ago, it was a different time; choose your own excuse on that one.

But it affected me. Directly and indirectly.

If a man treated a woman like this in today’s workplace, there would be an uproar. The industry has started taking on-set abuse very seriously – though there’s a long way to go. Just because something happened years ago, and was allegedly for that all-important cause i.e. a movie, for our entertainment, does that make it right now?

Any form of abuse towards anybody is wrong, I think we can all recognise that, but our personal levels of acceptance now have to be questioned. The world has changed since 1980, of course we know this. We understand emotional and psychological abuse better than ever. We know what gaslighting and coercive control looks like. And yet we are still complying and accepting this type of behaviour as a society, as it presents itself in all forms of entertainment.

The Staunch Test has coined a new term for films and TV dramas where the director abuses and torments his cast, male or female, for the sake of his ‘art’. We call them ‘Scourge movies’. A scourge is a horsewhip, or the person who causes trouble or suffering. That seems an appropriate term.