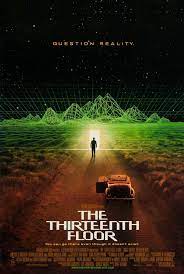 Hannon Fuller (Armin Mueller-Stahl) is a computer scientist and owner of a company that created a virtual reality simulation of 1937 Los Angeles. Fuller discovers something really important about the simulation but he is murdered before he can talk to his trusted colleague Douglas Hall (Craig Bierko). Douglas starts investigating Fuller’s death especially when a woman called Jane Fuller (Gretchen Mol) shows up introducing herself as Fuller’s daughter

Josef Rusnak’s The Thirteenth Floor is a science fiction neo-noir thriller movie that deals with the simulation hypothesis. It is loosely inspired by the sci-fi 1964 novel “Simulacron-3“ by Daniel F. Galouye. The movie was a box office disaster probably because it was released the same year as The Matrix (1999) which deals with very similar themes but was definitely more successful than The Thirteenth Floor.

Jane Fuller is the main female character, she’s both the femme fatale and the damsel in distress of the story and that makes her a rather dull character. She tells Douglas that her husband is abusive and that he threatened to kill her. During the climax of the movie her husband slaps her, hits her and chokes her. He also tries to shoot her various times until he is killed by detective McBain (Dennis Haysbert).

Given the futuristic and ground-breaking themes this movie deals with it would have been nice to see a stronger female character, what we got instead is the usual helpless young woman who is mistreated by men and needs to be saved.

The Thirteenth Floor is a good movie but it definitely could have been more innovative, especially with its female characters.