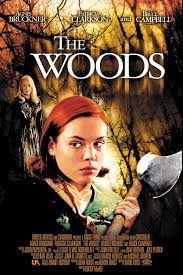 Troubled teenager Heather (Agnes Bruckner) is sent to a private high school by her estranged mother. From the first night, she starts having weird nightmares about the woods that surround the school and some of the students mysteriously disappear.

The Woods is a horror-thriller movie that clearly takes inspiration from Dario Argento’s Suspiria and it’s needless to say that comparisons between the two moves are not worth it.

Lucy McKee’s direction takes this movie along a most unoriginal route. Just like every movie set in a high school and involving girls The Woods has Samantha (Rachel Nichols) a popular blonde mean girl, Marcy (Lauren Birkbell) a not so popular brunette nerd girl and Heather the new girl who is mistreated by the mean girl and who becomes friends with the not very popular one.

Samantha is always bothering Heather throughout the movie, she calls her names and hassles her repeatedly and in one scene in particular they actually fight, slapping and punching each other. How is it possible that in such a strictly monitored boarding school none of the teachers blame the actual offender? Heather also gets slapped by the headmistress for starting the fight but that’s not true. However, right after a scene in which Samantha tries to warn Heather about the teachers’ evil magical powers, she is found hung in the dormitory.

This movie has so many scenes involving violence that it’s hard to list them all, especially towards the end. Heather’s mother is killed by a living vine from the woods in a scene that is obviously a reference to Sam Raimi’s Evil Dead (1981), Heather is drugged and pinned down in a hospital bed, Her father tries to kill the evil teachers/withes during their ritual with an axe but eventually Heather is the one who successfully kills them.

Every scene in this movie feels way too familiar and, besides all the violence that definitely makes this movie a #StaunchTestFail, The Woods could have been a much more original film if it only tried.