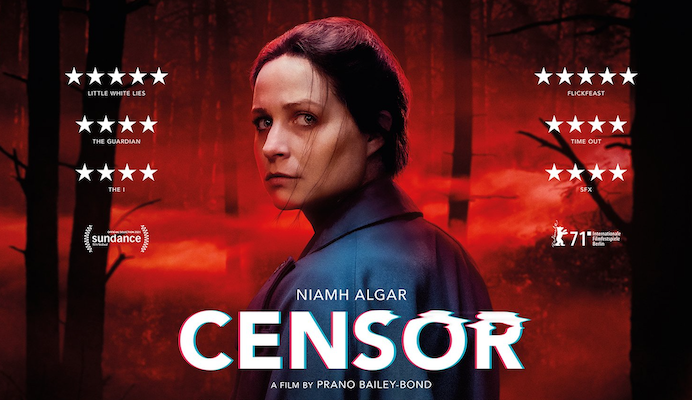 Film censor Enid Baines starts investigating after viewing a video nasty that reminds her of her sister’s disappearance.

Enid’s life is dominated by male figures who constantly remind her of her mistakes. Her journey into the world of ‘video nasties’ is her way of escaping from the endless sense of guilt she feels towards her sister’s disappearance and her job’s failures. A man who killed his whole family is said to be influenced by a violent film he’s seen, but perhaps it’s not his fault. Perhaps it’s because horror movies are too violent and Enid is not doing her job properly.

Censor is a clear homage to the ‘video nasty’ era and considering that it is a horror film itself violent scenes are expected, however, Enid is never a victim of physical violence.

There is a scene involving a creepy director who expects her to submit to his sexual advances, and will take what he wants if it’s not offered willingly, (apparently it’s almost impossible for a movie nowadays to not have at least one of these scenes) but she kills him while trying to stop him.

Everyone blames Enid for things that were not her fault, including herself. She didn’t kill that man’s family and she should stop blaming herself for her sister’s disappearance. But, in the end, she actually goes on a murderous rampage to save ‘her sister’, she turns into the murderer she was always scared of.

This is an extreme example of a woman criticised and blamed until she can’t take it anymore. Is it a Pass or a Debate?

Let’s say Staunch Test Debate for the questions it raises!