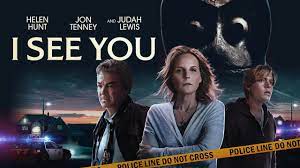 Jackie Harper’s (Helen Hunt) family is struggling with tensions after her detective husband (Jon Tenney) finds out she cheated on him. Strange events start plaguing their house while Jackie’s husband is investigating the disappearance of a child.

During the first part of this Adam Randall psychological horror/thriller Jackie seems to be the main character of the story, she is mistreated by her husband and her teenage son because of her infidelity and she is the first one who notices that something wrong is happening in her house. However, throughout the movie, her point of view becomes less central, the audience gets to see all the plot’s different levels and the other character’s viewpoints until the final twist is shown.

Even though the movie puts Jackie in a guilty position at the beginning she’s not the villain of the story, she’s just a victim. Don’t get me wrong, she still cheated on her husband but there’s something worse happening in her house and in her family.

The movie has a couple of scenes involving violence towards a woman but that woman is not Jackie. Mindy (Libe Barer) and Alec (Owen Teague) are two homeless people who have been secretly living in Jackie’s house. Without revealing the final twist let’s say that poor Mindy gets shoved down a staircase, smothered with a plastic bag and finally killed by a gunshot.

I See You is a quite original and entertaining thriller but unfortunately it’s also a #StaunchTestFail.