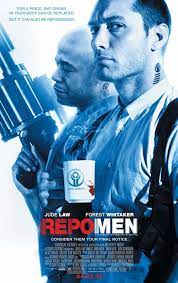 By adminDecember 1, 2021No Comments

It’s 2025, a company called The Union sells really expensive artificial organs and sends repo men to repossess them when the customers can’t pay the instalments anymore, resulting in their deaths. Repo Men is the story of Remy (Jude Law) a Union repo man who gets his heart replaced with an artificial one after an incident at work.

Remy was one of Union’s best repo men until his heart was replaced. He finds himself unable to kill the debtors because he starts feeling sympathy for them, He no longer earns money from his job thus, he can’t pay his debt and becomes one of them.

This is not a horror movie but as you can imagine it is very graphic. The first scene shows the audience how the repossessions work and even if the artificial organ’s owner is a man the repo man kills his girlfriend too because she tries to stop him.

Beth (Alice Braga) is the most relevant female character in the movie, she’s Remy’s new love interest after his divorce. Beth has numerous artificial organs and she’s the one who guides him through the black market. She is pushed and hit various times throughout the movie but there is one particular scene at the end that needs to be mentioned.

Remy and Beth break into Union headquarters and are forced to scan their organs internally in order to free themselves from their debts. They start cutting themselves and scanning each other’s innards but while Remy has just one of those synthetic organs poor Beth has many. He keeps cutting her and inserting the scanner inside her body until she’s unconscious. What makes this scene even worse is that Miguel Sapochnik shot it to look like a romantic/sexual scene.

There’s also a ridiculous scene in which Remy’s son, who is a child, tases his mother because she’s been annoying.

It would have been difficult to make a movie about the repossession of organs without including a woman dying or getting killed because everyone is hurt at some point in someway in this movie. However,  they didn’t even try not showing a woman suffering with this one, a woman is killed even if she is not a Union’s client in the very first scene of the movie and the hero cuts and tortures his love interest until she’s near death. Repo Men is a #StaunchTestFail.