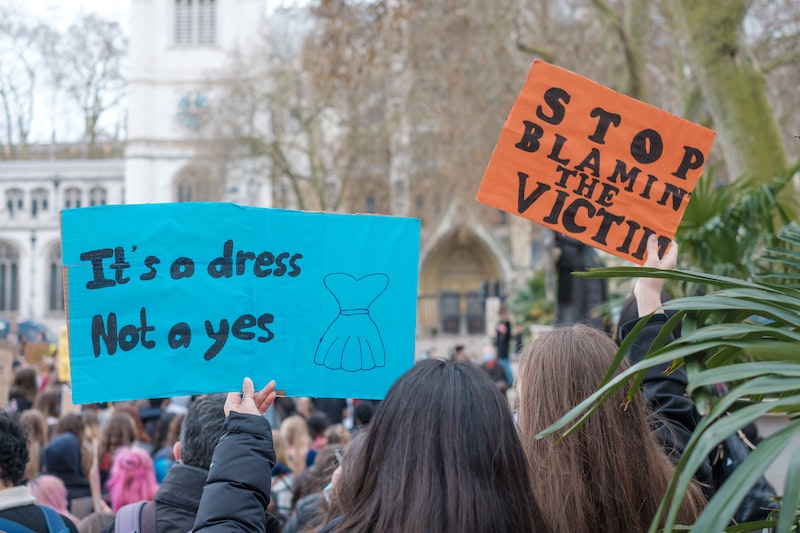 What are rape myths?

Night after night, film after film, TV show after TV show, violent acts of rape are portrayed on our screens and beamed into our homes. Crime shows are particularly guilty of repeatedly showing sexual assaults on women or using rape as a plot line.

Continually featuring sexual assault in popular culture is problematic in itself – it desensitises audiences to violence against women and girls and normalises a particular kind of stranger danger in people’s minds. One of the outcomes of this is widespread misunderstanding of what rape actually is. Many people are so influenced by what they see on screen that they fail to grasp that the majority of sexual assaults follow an entirely different pattern – and that in turn leads to failures to prosecute and convict real life perpetrators.

So how does the representation of rape in the media differ from the reality? In crime dramas, rape is generally committed by a violent man unknown to the victim. We’re familiar with women depicted fearfully walking alone at night and a stranger first stalking, then attacking them from behind. Or we see women being abducted, held captive, raped, and murdered. While crimes of this kind certainly happen and have led to a world in which women understandably fear walking alone at night and face frequent sexual harassment and threat from strangers, when it comes to actual sexual assault and rape, the statistics could not be more different.

The uncomfortable truth is that around 90% of rapes are committed by an acquaintance of the victim – a current partner, an ex, date, ‘friend’ or relative. All too often, her rapist is a man the victim knows and trusts. The difference between that which fiction persistently presents and what happens in real life creates a dangerous and false ‘reality’. No doubt fictional stories take this line partly because strangers offer a supposedly more frightening and unknowable threat, and hence, better drama. However, by shifting the idea of who rapes and who gets raped so determinedly, film and television drama have helped skew social understanding not only of the occurrence of rape, but its true after effects, starting with its negative impact on justice for women.

‘Rape Myths’ is a term which first emerged in the 1970s, introduced by feminists and sociologists. They are commonly but wrongly held beliefs about sexual violence, those who are victims and those who are rapists. They are deas which are intrinsically false, stereotyped or biased. They include wildly mistaken beliefs of what even qualifies as rape, (which itself is unhelpfully defined differently in different countries).  Rape myths are deeply entrenched ideas that are not easily challenged, especially amongst people who have received very little or no education on the subject and take their understanding of sexual crime from ideas received not only from film and television, but from the more colourful press.

A 2018 YouGov survey for End Violence Against Women (EVAW) looked at the attitudes of the wider British public to rape. Their findings are alarming.

A third (33%) of people in Britain think it isn’t usually rape if a woman is pressured into having sex but there is no physical violence.

A third of men believe a woman can’t change her mind if sex has started.

A third of men think that if a woman has flirted on a date, it generally wouldn’t count as rape, even if she hasn’t explicitly consented to sex. 21% of women think the same.

24% of people think that sex without consent in long term relationships is usually not rape.

40% of people think that is never or not usually rape for a man to remove a condom without his partner’s consent (or knowledge). This is called ‘stealthing’.

Around 1 in 10 people aren’t sure, or think that it usually or definitely isn’t rape if a man has sex with a woman who is very drunk or asleep.

All the above examples count as rape in the UK.

The tendency to equate rape with violence and force, rather than with consent being given or withheld presents a huge problem, one greatly exacerbated by the endless depictions of rape on screen. Drunk or drugged women cannot consent, but nor can they fight. To freeze when attacked is a recognised response to danger. This temporary paralysis has a name: Tonic immobility. Yet not to have fought back is seen either as a form of consent or proof the woman was actually into having sex at the time but regretted it later. This is victim-blaming at its most basic, founded on lack of understanding of the physical states that fear can induce.

In the UK, the legal definition of rape is ‘penetration with a penis of the vagina, anus or mouth of another person without their consent’ – the presence of physical violence is not part of the definition.  This rape myth alone gives a ‘hallpass’ to rapists who use coercion, manipulation or indeed the fact that the woman is unconsciousness to force sex, rather than use physical violence.

Crime shows often present rapes that not only mirror these rape myths but unintentionally reinforce them. Their constant presentation of rape as violent and anonymous, or the victim drugged so that violence is not required, undermines efforts to educate not only the general public — potential perpetrators and victims included — but those tasked with determining whether a rape has occurred: Police officers, prosecutors, juries and judges.

At each point from daring to report a rape to its legal conclusion, a woman strives to be believed, and is up against the ignorance, misogyny, doubt and unconscious bias and wrong beliefs she may encounter in any one of the people who stand in the way of justice. Her life will be examined and interrogated in a way the accused’s will not. First police, then the accused’s defence team will search for signs that she has had sex before, maybe frequently and with multiple partners. They will use consumption of alcohol or her failure to fight back as evidence against her. And they will draw on their own prejudices and rape myths to decide whether the well turned out, ordinary man in the dock – a man like themselves, or their brother, or son, is the kind of monster they’ve seen in a TV drama or exaggerated true crime series. They will worry more about ruining a man’s life, marriage, career or reputation than they will about the long-term consequences of rape, followed by injustice in court, on a victim’s future.

Because that’s another outcome falsely depicted on screen. A story of violence to a woman tends to end when the perpetrator is caught – with the assumption that tough justice follows. In real life, only 1% of men accused of rape in the UK will be found guilty. That there is justice for victims of rape is the biggest myth of all.